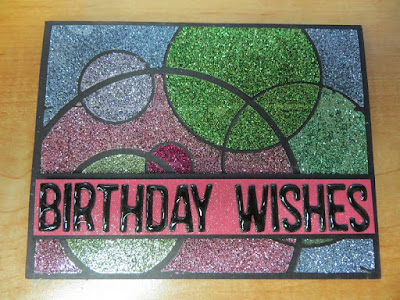 I went to a crop last Saturday, but I wasn't really in the mood to scrap, so along with all my scrapbooking supplies, I also brought my latest die acquisitions and label maker and wanted to organize them.  When I got to this Simon Says Stamp Mod Circle die, I just had to play.  I saw this technique done on a blog months ago (I thought it was Jennifer McGuire, but maybe Kristina Werner?--couldn't find the post) and fell in love.  I'm sooooo not a glitter girl, but this looked like so much fun.  The die has been out of stock ever since.  I guess a lot of people felt that way!  I had packed my Martha Stewart glitters and Stick It paper, just in case, and I'm glad I did.  This actually, was the 2nd card I made. 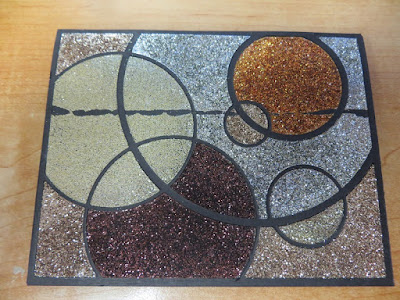 I wanted this first card to be golds, silvers & browns, and I was so disappointed with the Stick It paper.  You can see the line across where the seam was between pieces of release papers.  I didn't notice this until all the glitters were done.  The adhesive is a fine film, so when I lifted the 2nd piece of release paper off, the film stayed with the release paper, and not on my card.  I can fix that like above, but what a bummer! 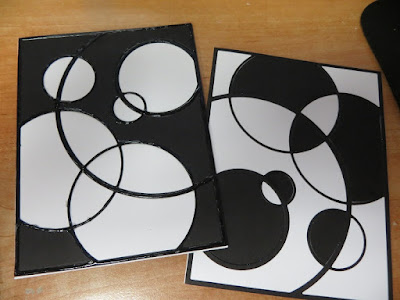 I was playing with the leftover pieces, and this is what I came up with.  They still need to be finished. 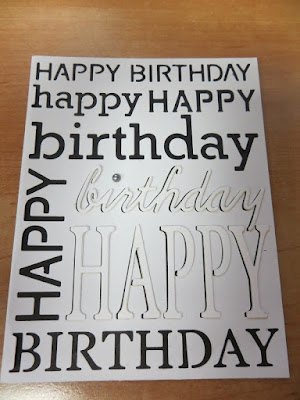 This was another die I bought.  I liked it because you could do an entire background, or just cut out individual words.  I'm not sure of who makes it, and it's still packed away with all my gear which is still in my car.

I cut out three of these because the first one had a few spots where it didn't cut all the way through.  I tried it again using just a metal shim from Memory Box, and then again with the Metal Precision Base Plate by Sizzix.  I think for this die, the metal shim worked the best.

I didn't want to waste all those beautiful letters, so I started running them through my Xyron machine and layering them.  After just two words, I was so done.  haha!  I only had black & white cardstock with me, so I decided to try this. 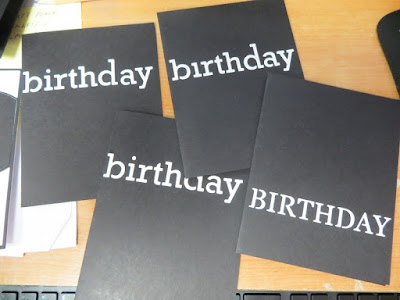 I still couldn't bring myself to throw out that big pile of letters, so after spending about 15 minutes sorting them out, I started playing with simple designs on black.  Love them!  They'd make great "over the hill" cards.  I could also just use the word happy on the inside.  Plain & simple. 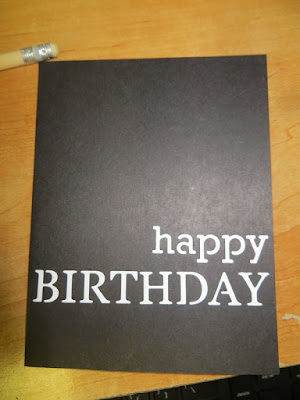 Tried one with the word happy on the front, but I think I prefer the one word cards in this design.

For an all day crop, I only completed one layout spread, but I had so much fun playing with these dies, and also getting my new dies organized.  When I got home and checked my emails, I noticed it was World Cardmaking Day.  Well, what do you know?!  haha!  Guess it was meant to be.

I'm going to submit the top card in this post in the Simon Says Stamp World Cardmaking Day blog post.  Today's the last day to post, and it's the only one that's completely finished!

Posted by Stephanie Rodgers at 6:50 AM