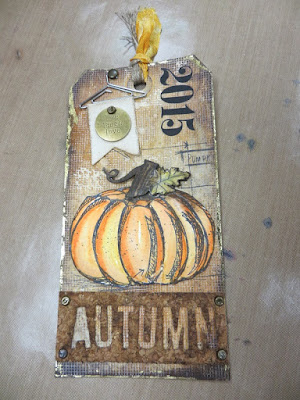 Grace & Mercedes came over for another night of play, and we decided to work on Tim's tag for November.  You can see his original tag here, along with all the instructions and step out photos.  The pumpkin stamp worked very well for this technique, so we all decided to go with it. 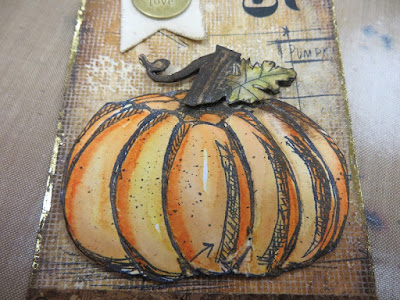 I didn't own the background stamp Tim used on his, so Grace & I substituted with Stampin' Up!'s Linen background stamp, and it worked very well with the Distress Paint resist technique.  While working on it, I accidentally ripped my pumpkin.  The arrow from the blueprint stamp is actually pointing to it!  haha! 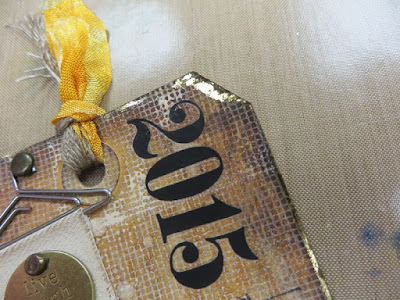 Another new technique we learned was adhering foil with just a glue stick along the edges of the tag.  Definitely going to do this technique alot more in the future!  Here, you can see I added some rub ons by Tim. 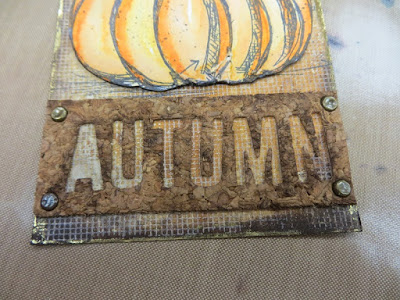 We all loved cutting through the cork and using the negative as an embellishment on our tags.  The cork was very similar in color to my background colors, so I added some Gathered Twigs Distress Ink on the top of my cork, especially around the letters.  I also used Tim's texture hammer to smash the tops of my brads. 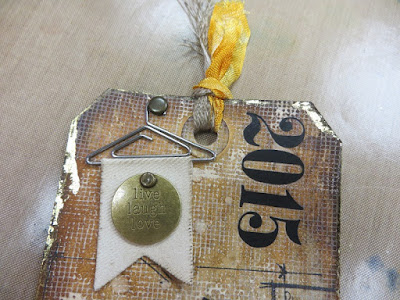 I was out of Idea-ology arrows, so we all got a little creative with embellishing the top half of our tags.  I decided to use a hanger clip with a canvas tag (Close to My Heart).  I just folded it over the hanger.  It was adhesive backed, so it just stuck to itself.  I found a metal embellishment in my stash and added it with another brad.  I used a larger brad to adhere the hanger to my tag. 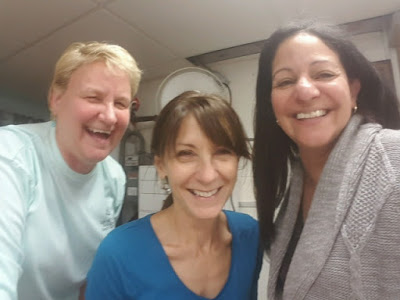 The girls & I took a selfie after taking pics of our tags.  That's me on the left, Grace in the middle, and Mercedes on the right. 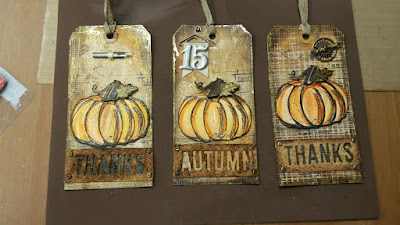 We took this group tag pic before I was done because the girls were leaving.  Graces' tag is on the left.  She wrapped some string around a pen nib.  She also put the Gathered Twigs Distress Ink on her cork, and when she saw what Mercedes did, she also added black Wink of Stella on her tag between her letters.  My *unfinished* tag is in the middle, and Mercedes' tag is on the right.  I showed her how to layer some of Tim's Idea-ology gears with a spinner.  She took it a step further and wrapped some gold cord around the spinner.  She only put the Distress Ink around the edges of her cork and tag, and added the black Wink of Stella to her letter openings.  She also used one of Tim's ledger stamps for her background.  Stunning!

I gotta tell you, Mercedes is very, very new to stamping, and this is only her 3rd Tim tag, and each one, she has knocked out of the park!  She's a natural! 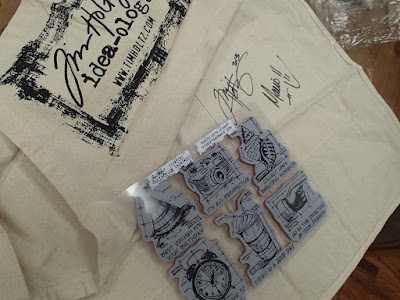 I promised a giveaway when I got my new blog up & running, so here it is.  I attended both of Tim's classes at the Papercraft Clubhouse in CT, and received an apron for each one.  I asked Tim & Mario to sign one for me to use in a giveaway on my blog, and they were both happy to oblige.  I'm also adding in the Simon Says Stamp exclusive Tim Holtz Stamptember 2015 custom stamp set.

I need to build up my following again, so all you have to do to enter is sign up for my blog, and leave a comment.  You've got until Friday, December 4, 2015 to enter.  Good Luck!


Posted by Stephanie Rodgers at 3:33 PM